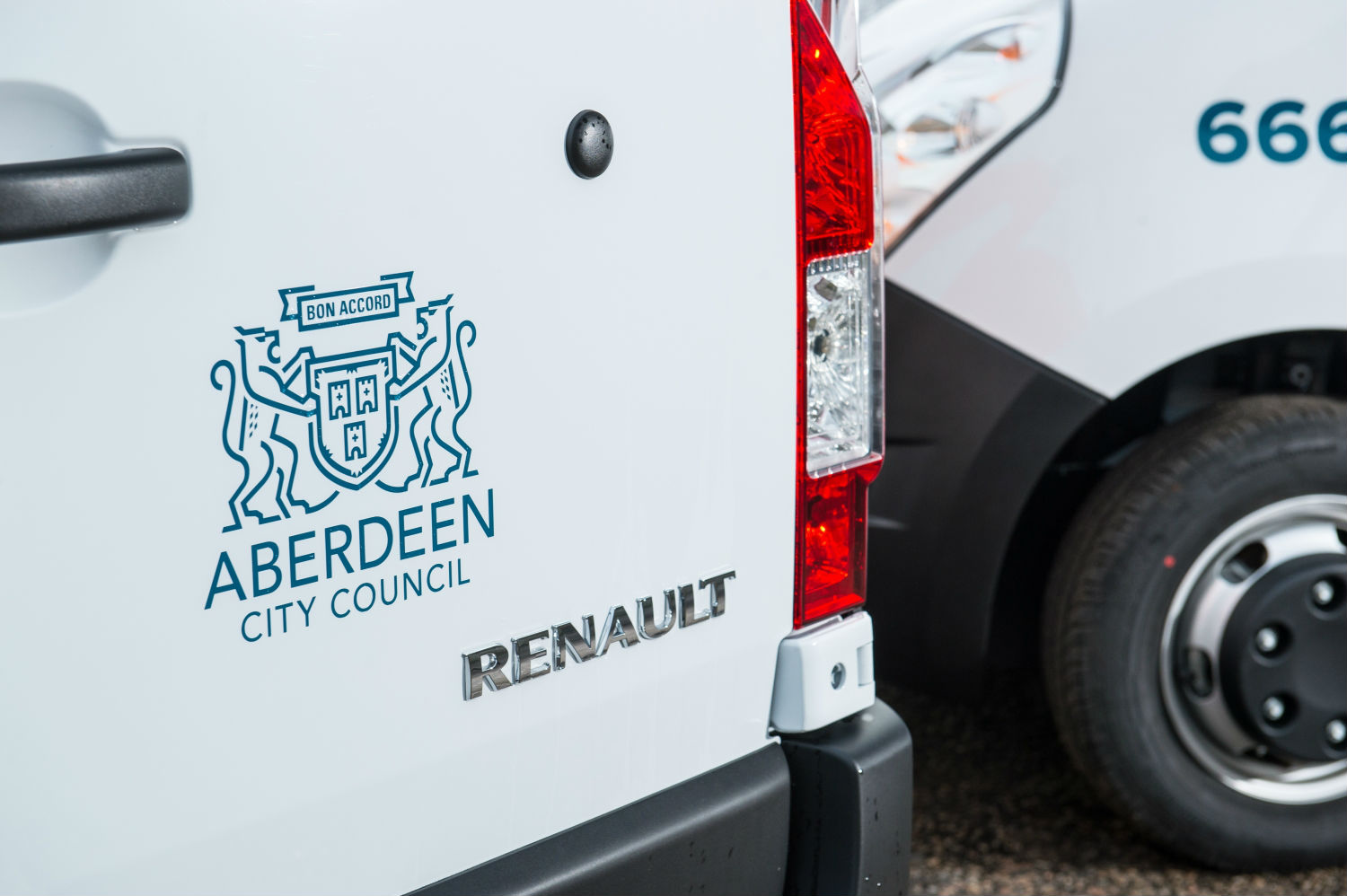 Renault Pro+ commercial vehicles are playing a vital role in maintaining one of Scotland’s busiest cities after Aberdeen City Council transformed its hard-working fleet with the addition of over 200 Renault vans and conversions.

It is the first time that Aberdeen City Council has chosen Renault vehicles for its award-winning fleet operation, the order now accounting for nearly half of its commercial vehicle fleet and replacing similar vehicles from a variety of other brands.

They will be used by several different divisions, including roads, grounds, building and IT, to conduct vital works in an eight-mile radius of Aberdeen’s centre. Notably, the trio of pure electric Renault Kangoo Z.E. will be used by ACC staff to carry out repairs and servicing to parking meters in the heart of the city, their ease of use in urban traffic and minimal environmental impact making them ideal for the role.

Aberdeen City Council’s decision to invest in Europe’s leading light commercial vehicle brand was particularly influenced by driver feedback, after sales support, and the quality of the Renault Pro+ model range. The variety of the line-up, including an all-electric compact van and off-the-shelf factory conversions, also enabled Aberdeen City Council to conveniently meet all its vehicle requirements with one manufacturer.

The Euro 6d conformity of all Renault Pro+ vehicles ensured the council could reduce the carbon footprint of its fleet, while having no effect on the usefulness of its vehicles. In time, Aberdeen City Council aims to make the transition to an all-electric fleet, with it set to determine the suitability of pure electric power for its large vans with the additional order of two zero-emissions-in-use Renault Master Z.E.

The vehicles have been supplied through Specialist Cars Renault in Aberdeen. The dealership will also provide after sales support, with Aberdeen City Council benefiting from the availability of mobile technicians, replacement vehicles if any are off the road for more than 24 hours and a guaranteed slot in the workshop within three hours of an issue being identified. The Council also enjoys the reassurance of the standard three-year/100,000-mile warranty that all Renault Pro+ commercial vehicles are supplied with.

Of the Renault Master conversions, 74 were ‘off-the-shelf’. The factory build of the 55 Double Cab Tippers and 19 Dropsiders aided the efficient delivery of the order, with only minor additions required, such as extra lighting, storage cages, and ply lining, added by Arnold Clark bodybuilders before the vehicles were pressed into service.

The Renault LCVs are also the first of Aberdeen City Council’s fleet to be fitted with the Michelin Tyre Pressure Management System (TPMS), which ensures they are always running on tyres inflated to the optimum pressure for enhanced safety and efficiency. The other additional safety feature being fitted to vehicles is the VWS (Vehicle Weighing Solutions) VOPS TM2 on-board weighing system, which will prevent vehicle over loading.

The Council’s decision to invest heavily in the Renault Pro+ commercial vehicle brand coincides with its fleet operation being officially recognised for its expertise at the recent Transport News Scottish Rewards presentation ceremony, where it was awarded the title of Local Authority Fleet Operator of the Year.