Environmental concerns are at the top of the list with Doosan, which sees ‘Green Energy Technologies’ as a platform for strong growth in the future. At Intermat 2012, Doosan Infracore Construction Equipment will launch several new products meeting the requirements of the latest EU emissions legislation. As well as meeting the new regulations, these new generation Doosan machines offer many features to increase productivity while reducing fuel consumption.

The main focus of Doosan Infracore (DI) in the green energy technology field is to develop the optimum intelligent excavator system for maximizing operational efficiency. Hybrid excavators, equipped with a diesel engine and a device to store electricity to help reduce CO2 emissions and improve fuel efficiency, are now under development. In addition, Doosan Infracore’s commitment to “Green Energy Technologies” will continue with the development of a concept excavator CX, which is designed to be environmentally friendly and economically efficient.

Also being developed by Doosan Infracore are unmanned robot excavators that combine ‘i-Hand’ technology and an intelligent excavator system. The key to developing i-Hand technology is the ‘Master-Slave’ excavator control system, whereby an operator wears an electronic sensor detection device to manipulate the excavator remotely by moving their hands and arms. The first-stage model for this system, the first of its kind in the world, was developed in 2007.

In addition to the construction equipment market, wind power generation, carbon dioxide capture and storage (CCS) technology and new fuel cell systems are some of the important new developments that Doosan sees as future growth engines for the company.

Capitalising upon its extensive power plant equipment know-how, Doosan Heavy Industries & Construction (DHIC) is leading the world in green energy with the development of the WinDS3000TM wind power system. This is a new 3 MW offshore power generation system, the first installation of which was completed offshore of Jeju Island in Korea in the second half of 2011. DHIC has won a contract for building a wind farm comprising three WinDS3000TM wind power systems in Shinan in the South Jeolla Province of China. 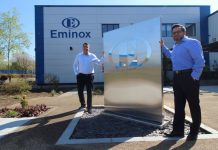