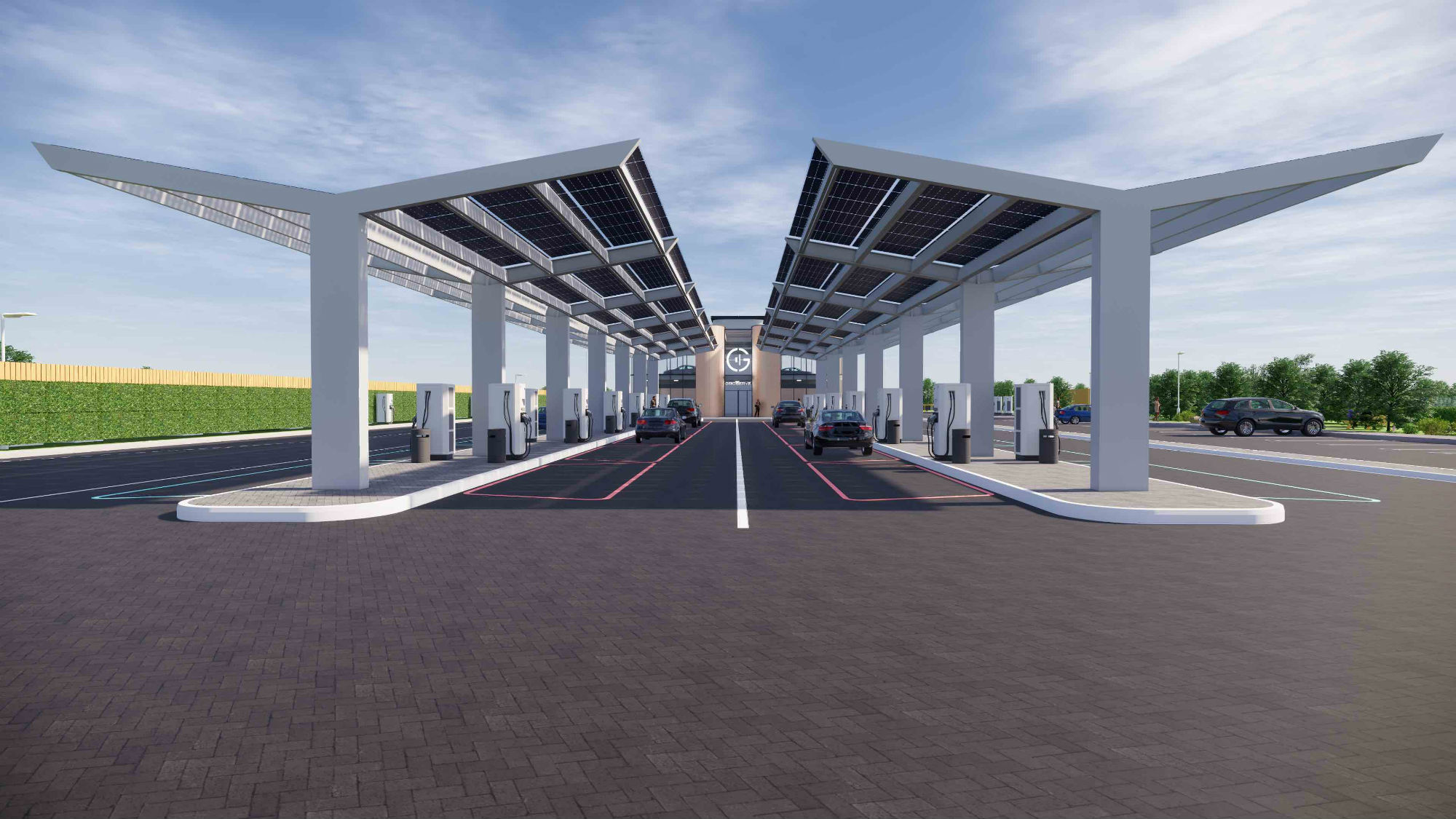 GRIDSERVE has announced that the first of a nationwide network of over 100 Electric Forecourts® is now under construction and will open this summer, offering convenient, ultra-fast, low-cost charging.

The Electric Forecourt near Braintree, Essex, can charge 24 electric vehicles at once with superchargers that can deliver up to 350 kW of charging power, enabling people to charge vehicles within 20-30 minutes initially, and much faster in the future as battery technologies mature.

Whilst vehicles charge, drivers will be able to relax or shop in a state of the art two-storey building, which will house a range of facilities including a coffee shop, convenience supermarket, and airport-style lounge with high-speed internet and meeting rooms.

The facility will also function as an education centre for electric vehicles and sustainable energy, which will help people to understand, test drive, and secure vehicles that are most suitable for them, with the ultimate aim of providing the confidence, and support to transition to an all electric future.

As part of its £1-billion programme, GRIDSERVE is developing more than 100 Electric Forecourt sites on busy routes and near powerful grid connections close to towns, cities and major transport hubs.

Supporting the UK government’s commitment to ban the sale of new petrol, diesel and hybrid vehicles within 15 years, the company aims to have a UK-wide network operational within five years. GRIDSERVE is currently in discussions with a number of local authorities around the UK and expects to have several more sites in construction and many more into planning by the end of this year.

Toddington Harper, CEO and founder of GRIDSERVE, said: “We’ve designed our Electric Forecourts entirely around the needs of electric vehicle drivers, updating the petrol station model for a net-zero carbon future. Many more people want to buy electric vehicles but are worried about how to charge them. We will help solve that challenge and deliver the confidence needed to make the switch to electric transport.

“This will be the most advanced charging facility in the UK, and possibly the world. Drivers will be able to turn up and charge their vehicle at the fastest rate each vehicle can support, using 100% renenewable energy, and with the best possible charging experience.”

Construction on the first Electric Forecourt on a 2.5-acre site adjacent to Great Notley, just off the A131, is supported by a £4.86-million grant from Innovate UK, one of the largest awarded last year. The site has links to Stansted Airport, Chelmsford, Colchester and the M11.

GRIDSERVE is also developing several large solar farms, supported by batteries, to supply energy to its Electric Forecourts to ensure that 100% of the electricity is clean and low cost. The company recently completed the UK’s most advanced solar farm, a 34.7-MWp project at York with bifacial panels, sun trackers, and a 30-MWh battery, and is completing a 25.7-MWp project at Hull using similar technologies. It plans to develop Electric Forecourts at both sites powered by the solar produced on site.