The bus and coach market in the UK fell in August for the first time this year.

Some key stats include;

“Despite strong performance throughout 2012, August recorded the first fall in total bus and coach registrations this year, with the market down 27.8%,” said Paul Everitt,  Chief Executive. “While this fall highlights uncertain conditions in the wider economy, it is encouraging to see the sector’s strength over the year-to-date, with registrations up across the total purpose-built and converted bus sectors.” 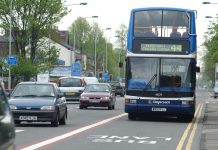