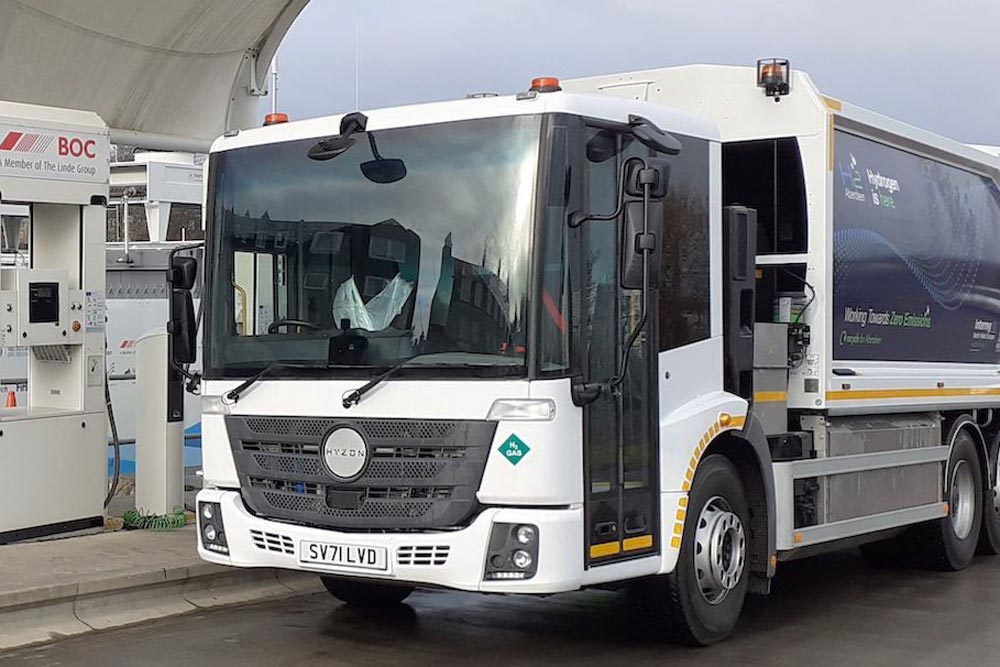 An Allison fully automatic transmission has been specified for the UK’s first refuse collection vehicle (RCV) with a hydrogen fuel cell powertrain.

The pioneering new hydrogen-powered RCV is based on the 4200 mm wheelbase HH-Mercedes-Benz Econic Hydrogen chassis and has a 15kg tank capacity at 350 bar and 140 kWh batteries at 700 v. The RCV, which will be fuelled via Aberdeen City Council’s own green hydrogen infrastructure, will have a range of 155 miles (250 km), enabling it to travel greater distances than an electric vehicle.

The vehicle is the latest step in the “H2 Aberdeen” initiative, which aims to bring about a hydrogen economy in the city’s region. Aberdeen City Council first introduced ten single deck hydrogen buses in 2012 followed by the world’s first deployment of 15 double decker buses in 2020. In 2018 they deployed the UK’s first hydrogen-powered sweeper vehicle, which also features an Allison transmission.

The RCV is also part of the European Union’s Interreg HECTOR project, in which seven European regions aim to demonstrate that fuel cell waste-collection trucks can help reduce emissions from road transport. Other vehicles in the project also feature Allison transmissions, such as an RCV from AGR, a waste management company in Herten, Germany that is based on a DAF chassis.

Green hydrogen, produced from renewable energy sources via the electrolysis of water, is completely carbon free. Hyzon currently produces the highest power density hydrogen fuel cell modules in the world, capable of providing good payload capacity and range to medium- and heavy-duty transport. The fuel cell’s power can be tailored to the vehicle’s maximum gross vehicle weight and operational requirements.

“Aberdeen City Council already runs 500 vehicles equipped with Allison transmissions and has been impressed for many years now by their drivability and durability,” said Nathan Wilson, Account & Area Sales Manager, UK & ROI at Allison Transmission. “And though Allison Automatics were originally designed for diesel engines, they are equally well-suited to alternative-fuel and alternative-power vehicles. For these reasons, the Council specifically requested that its new hydrogen-powered RCV should also have an Allison transmission.”

Aberdeen City Council’s new hydrogen-powered truck combines the Econic’s low-entry cab with a vehicle body made in the Netherlands by waste collection solutions specialist, Geesinknorba Group. Equipped with a combi split bin lift, this vehicle will go into service in March on a domestic refuse collection duty-cycle which entails constant stop-starts for 7.5 hours per day and 5 days per week. A manual or automated manual transmission (AMT) would struggle with such demands because of wear and tear on the clutch, but Allison’s fully automatic transmission replaces the mechanical clutch with a patented torque converter. This reduces maintenance requirements, as well as improving drivability and making vehicles easier to control during stop-starts and low-speed manoeuvres.

Allison Transmission also recently launched the new eGen Power™ electric axle system for trucks. The eGen Power 100D is one of the most powerful and fully integrated e-axle systems in the world for medium- and heavy-duty trucks. It features two electric motors capable of generating 227 kW of continuous power each, or 454 kW in total, with a peak combined power of 652 kW.