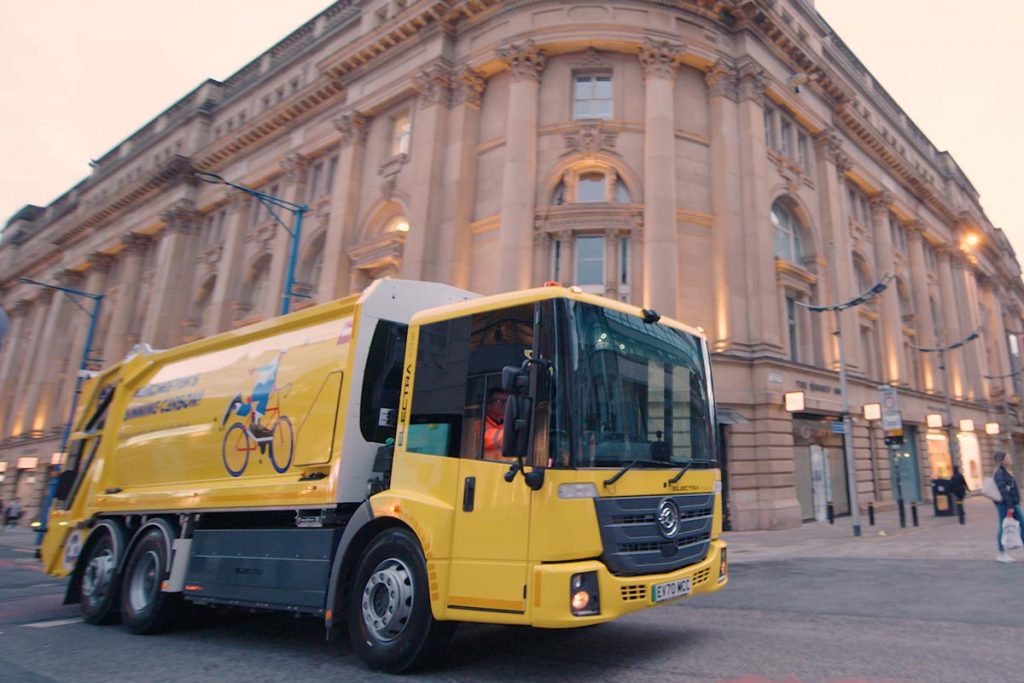 As local councils and waste companies drive towards their net zero emissions targets, the use of battery-powered refuse trucks is playing an ever more important role.

Manchester City Council and waste contractor Biffa have introduced a fleet of 27 fully electric refuse collection vehicles, replacing about half of the council’s existing refuse collection fleet after a two-year trial.

The eRCVs, supplied by Blackburn manufacturer Electra Commercial Vehicles, are based on an Econic chassis, with a Geesink N4 body and an Omnidel split bin lift from Terberg Matec.

The new vehicles replaced diesel trucks that reached the end of their natural life, and according to the council will save about 900 tonnes of carbon emissions a year.

Sid Sadique, Chair of Electra Commercial Vehicles, said: “The trial proved that a fully electric vehicle does the same job as its diesel equivalent with no compromise on payload or operation, with the benefit of zero tailpipe emissions.”

Following its trial, the corporation acquired five new Dennis Eagle/Electra eRCVs to collect and recycle the waste of the Square Mile.

These new 18-tonne and 26-tonne vehicles are part of the corporation’s plan to ensure at least 90% of the district meets World Health Organisation guidelines for nitrogen dioxide by 2025.

The eRCVs, powered by 100% recyclable lithium-ion batteries, are designed for urban environments with short routes and can complete a full shift on one charge.

Other innovations include liquid-cooled permanent magnet drive motors that ensure the vehicles can withstand stop-start environments where high torque is required.

“We will continue to take steps to ensure that we are reducing emissions from our entire vehicle fleet, for the benefit of all.”

Dennis Eagle based the eCollect on its Elite 6×2 rear-steer chassis, with Olympus 19-cubic-meter body and Terberg automatic split bin lift. The diesel engine, transmission and other legacy components have been replaced by a 300 kWh battery system and a 200 kW electric drivetrain.

Richard Taylor, Dennis Eagle Sales and Marketing Director, said. “The fact that we have reached the point where we can produce a 26-ton vehicle for such an energy-demanding role speaks volumes about how far electric vehicles have developed in recent years, and how much more widespread they will become in the near future.”

Electric refuse trucks are also operating effectively in rural areas: an eCollect eRCV has gone into service collecting residual waste from households across Powys, one of the largest and most sparsely populated counties in the UK.

The vehicle is initially operating from Powys County Council’s Brecon depot in the south of the Welsh county.

Nigel Brinn, Powys County Council’s Corporate Director for Economy and Environment, said: “This vehicle will reduce carbon emissions by approximately 25-35 tonnes per year compared to a standard, non-electric vehicle and will help us reach the authority’s ambition to become carbon neutral by 2030.”

Rural all-electric refuse vehicles are also being piloted for the first time in Scotland by Dumfries and Galloway Council and SP Energy Networks.

They have a battery size of 287KW and a range of 100 miles over 12 hours, enabling bin lorry operators to execute 1,500 bin lifts.

Cllr John Martin, vice chair of the communities committee at Dumfries and Galloway Council, said: “Dumfries & Galloway has declared a climate emergency and set out bold targets to have net zero emissions by 2025. For us to achieve that, we need creative solutions specifically tailored to the local challenges faced by rural communities.

“The launch of these electric refuge vehicles shows our intent to roll out electric transport solutions across public services in years to come.”

The 2015 Dennis Elite, featuring a Dennis Olympus body and a Terberg Omnidel bin lift, is being used to collect domestic refuse in the North Wales county.

It is powered by lithium iron phosphate (LFP) batteries, which produce up to 280kW of power without an independent charging system and come with a five-year or 3,000 charging cycle warranty.

RVS estimates the electric conversion has saved up to £100,000 compared to purchasing a new vehicle.

The firm works on behalf of Netherlands-based conversion specialist Electric Mobility One Stop Shop (EMOSS) in the UK, operating under the e-One banner.

Spencer Law, Managing Director at RVS, said: “Our company has been working diligently on the problem of what to do with end of life RCVs. Instead of scrapping them, we have delivered the best possible solution: refurbish and convert for use as electric vehicles.

“This will help councils all over the country achieve their ambitious net carbon-zero goal.”

It is clear that electric refuse trucks have a major role to play in reducing emissions across the waste collection industry in urban and rural areas, and to help the UK reach its 2050 net zero emissions target.