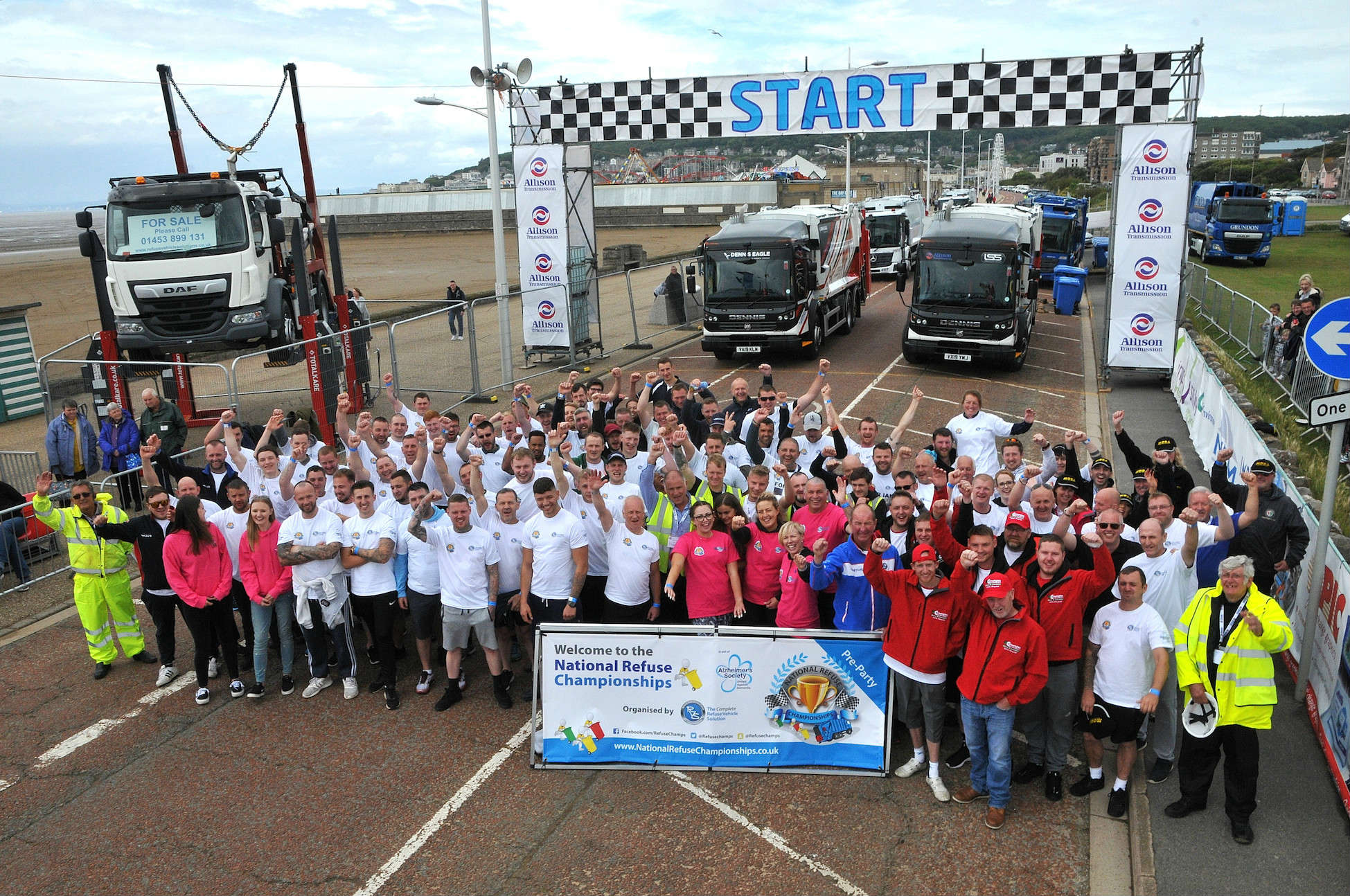 The National Refuse Championships returns to Weston-super-Mare on Saturday 13 June 2020 and event organisers are calling for men and women who work in the waste and recycling sector to sign up.

Spencer Law, Founder of the NRC, said: “We are looking for 32 teams this year, and we’d like to encourage more female teams to enter. It’s not just for collection crews and drivers; staff working in offices, sorting facilities, workshops or out in the field are welcome too.”

The event brings together employees from local authorities, vehicle & equipment manufacturers and private waste collection companies to raise money for the Alzheimer’s Society by racing up and down Weston-super-Mare beach lawns.

The gruelling races involve teams of five people – drivers, loaders, workshop and office staff – who race against the clock, testing their strength and stamina, loading wheelie bins with sandbags before pushing or pulling them 50 metres to be emptied into an awaiting refuse vehicle. This is repeated numerous times as the truck moves forward in 50 metres stages before making a final race to the finish line. The teams compete in heats throughout the day, two at a time, culminating in a semi-final and final to determine the winner and runners-up.

Spencer Law, Managing Director of Refuse Vehicle Solutions Ltd (RVS), is responsible for re-inventing the event, which used to take place in the late 1980s and early 90s, and was known as the World Refuse Championships.

Spencer said: “We wanted to recreate the event because it was really popular and it’s a fun way to celebrate the valuable work done by refuse collection crews. The event brings people together from all corners of the waste industry and it’s a great opportunity for organisations to do some team building, because everyone, regardless of their job, can join in. We managed to raise over £21,000 for the Alzheimer’s Society last year and hopefully we’ll beat that this year.”

“Towns are growing and our Econic trucks are up to the challenge. Last year we welcomed schoolchildren on board our Econic trucks to learn about the safety of our vehicles; to us it’s vitally important to share the investment of Mercedes-Benz to the community and the next generation. Our trucks participating in the event are industry leading and offers decisively better safety with its unique DirectVision cab so let’s see if that helps the racing!”

The races are fun but competitive and last year Grist Environmental managed to hold on to the title for the second year in a row.

Marcus Grist, Events Director, Grist Environmental and Team Captain/Driver: “It was a great day and the sportsmanship between the teams was fantastic. We love the event and we’ve never been beaten over the line, although we did come 2nd one year due to penalties. Our families had a superb time and the Alzheimer’s Society is a great charity.”