Clayton Power UK has developed a vehicle-mounted lithium power supply (LPS) system that charges while the vehicle is moving. It provides enough power to run a utility vehicle’s tools and eliminate the need for idling.

Running a vehicle’s engine while stationary wastes valuable fuel and creates unnecessary pollution. It can also damage an engine as fuel residues build up, causing corrosion and driving up fuel consumption

However, utility vehicles often use their engine to provide electricity to run power tools, like compressors or welders. A delivery van burns about three litres of diesel per hour when idling. When operations last all day, this can add up to a significant cost.

He pointed to a Clayton client that used the LPS system to power an electric compressor when it was laying fibre. “They were using that for probably eight hours a day,” Sean said. “When the compressor was operating, it was using roughly about two and a half litres of petrol per hour. From one full charge of our battery, we were providing enough power to run this compressor and complete their day’s fibre work.

“What you’re doing there is you’re removing eight hours’ worth of generator usage, compressor usage and vehicle idling. Collectively the cost and CO2 savings are massive.”

The LPS system also comes with a built-in battery management system to monitor power usage. This allows a user to maintain an optimum output and monitor usage.

“We don’t really like to call it a battery,” Sean said. “It’s much more than that – it’s got an inverter, battery management system, Euro 6 compliant DC-DC converters, RCCB protection, smart charger and more all in one box.” 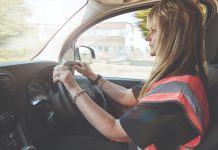