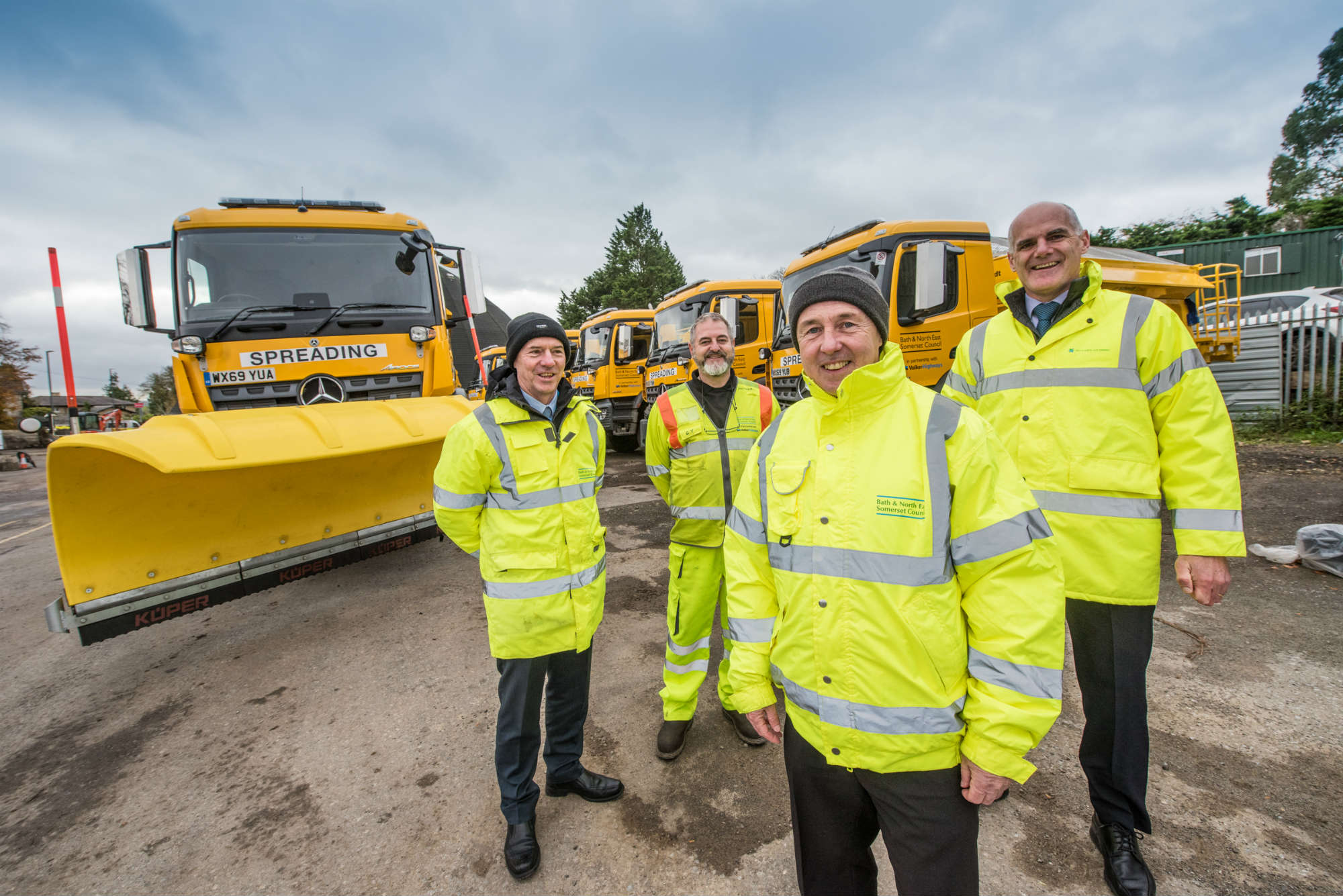 B&NES has opted for seven Mercedes-Benz 18T Arocs 4×4 1832 Stratos III 6m3 gritters and one Mercedes-Benz 26T Arocs 6×6 3340 Stratos III 9m3 gritter for its winter maintenance fleet. The council selected the Schmidt equipment after going out to tender under the TPPL (The Procurement Partnership Ltd) framework agreement, and then selecting a final shortlist of three suppliers, including the incumbent.

However, the quality of the Schmidt machines won the day, and the council opted to outright purchase, rather than lease, the new equipment.

The new gritters will be operated by VolkerHighways, who are currently working with the council on their Highways Term Maintenance Contract to ensure it meets its statutory duties in terms on keeping the highways and byways snow and ice free throughout the winter months.

B&NES covers an area, two thirds of which is green belt, stretching from Bristol and Bath south to the Mendip Hills, and east to the Cotswolds and the Wiltshire border.

The council is responsible for gritting 263 miles across nine different routes out of a total of 683 miles, some 38% of all roads, with a huge variety of adopted surfaces to treat, ranging from the centre of the heritage city of Bath to A class and B-class country roads and even some remote rural roads.

Craig Jackson, B&NES’ Highway Maintenance and Drainage Manager who led the tender process, said: “We have been very impressed with the build quality of the Schmidt machines, which we specified with the latest Euro6 complaint Mercedes chassis and four and six wheel drive.

“We have already used them on a number of runs so far this winter, and so far so good. We expect them to be active now right throughout the winter season,” he said.

The Stratos III has been deliberately designed with ease of maintenance and low costs in mind. It is easy to wash down and maintenance points are very accessible for greasing. Another of its plus points is the accuracy of spreading, and the machine uses a closed loop hydraulic system to operate the conveyor belt and the spinner independently of each other.

The nerve centre of the spreader is the state-of-the art Evolution Smart (ES) control panel, which monitors the machine at a rate of 2,000 times per belt revolution and makes continual adjustments at 100 times per second to ensure accuracy is maintained. All of the time, these adjustments are fully road speed-related.

The ES control panel also integrates seamlessly with the Schmidt AutoLogic system, an easy to use, automatic spreading system with GPS-guided routing, which BANES has selected for all its new machines.

The GPS navigation guides the spreader driver along the correct route and the spreading settings occur automatically, enabling the driver to fully concentrate on the traffic without being distracted by the spreading process, thus increasing road safety.

“We have found that AutoLogic is not only safer for our drivers as it allows them to concentrate fully on the road, but it also ensures that the correct route is gritted correctly every time, regardless of who is the driver,” said Craig Jackson.

B&NES has also selected the Schmidt Winter Report, a web-based telematics system which shows the user where the spreader has been and where it is currently spreading in real time. It is fully integrated with the ES control panel, requires no other hardware or software and gives just one point of contact.

“This has proved another very useful asset which allows us to monitor the location of all our new spreaders at any one time and make appropriate adjustments accordingly. We very much look forward to reaping the benefits of our new winter fleet with its new innovative technology that we are confident will provide us with safety and savings,” added Craig Jackson.