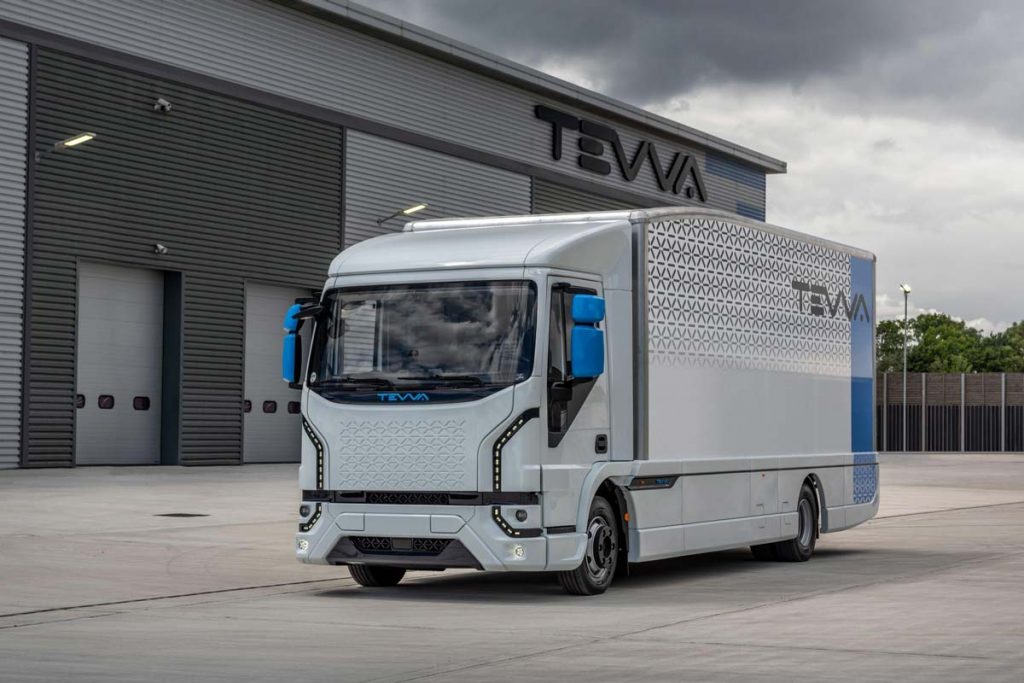 Road freight operators looking to decarbonise the heavier end of their fleet now have another option open to them – the first hydrogen fuel cell-supported HGV to be manufactured, designed and produced in the UK.

The 7.5-tonne hydrogen electric HGV from Tevva, a Tilbury-based scale-up, was unveiled little over a week ago (30 June 2022) at the Road Transport Expo in Warwickshire. With a range of up to 310 miles/500 kilometres, Tevva said that adding a hydrogen fuel cell system to its battery-electric HGV design will mean that its zero-emission solution will work for a majority of fleet operators for both urban and extra-urban operations.

As well as extending the range of the HGV, hydrogen has the added advantage of taking a broadly similar amount of time to refuel (5-20 minutes) as a diesel truck. Tevva said its use of both battery electric and hydrogen energy sources is designed to futureproof its customers as the industry transitions away from fossil fuels ahead of the phasing out of the sale of new fossil fuel powered HGVs between 2035 and 2040. The Essex-based company maintains that its proprietary software systems also operate battery and hydrogen fuel cells at the highest efficiencies to optimise cost effectiveness, carbon effectiveness, resilience and refuelling convenience.

Tevva CEO and founder Asher Bennett said: “We are excited to launch our hydrogen electric HGV, creating a landmark moment for Tevva and UK manufacturing. We firmly believe that the post-fossil fuel future, which is quickly approaching, will see a range of technologies and fuels take centre stage in the transport industry. By embracing hydrogen, we are futureproofing ourselves, our clients and the industries and communities they operate in.”

Transport Minister Trudy Harrison MP said: “Hydrogen fuel cells and other zero emission technology will be vital in helping us decarbonise transport. A thriving UK hydrogen industry could not only help us meet our climate change obligations, but also support thousands of jobs across the country in years to come.

“UK-based manufacturers like Tevva continue to build on the skills and expertise we have in hydrogen in the UK, developing new technologies, supporting economic growth, and working towards net zero.”

Michelle Gardner, Head of Public Policy, Logistics UK, said: “While the path for decarbonising the lighter end of the commercial fleet has begun, the heavier end is proving more of a challenge. Tevva’s recently unveiled HGV, combining as it does both hydrogen fuel cell and battery electric technology, offers a real solution for operators looking to procure trucks that have a decent range but emit zero-emissions at the tailpipe.”